So, how does a degausser work?

To understand how degaussers work, first, we have to understand how hard drives work. Hard drives store your data on something called a platter. The platter is the part of the hard drive that contains millions of tiny bits of data. These bits of data contain information in series of binary digits – essentially lots of ones and zeros. While binary code might seem daunting to look at, it’s actually quite easy to understand.

As humans, we developed ways to count using a base-ten number system (zero to nine) – simply because we have ten fingers. Computers, as you know, don’t have fingers. Instead, they have two ways to understand numbers and letters – “on” or “off”. That’s what the ones and zeros mean. Ones are on, and zeros are off. Here’s a quick example.

You want to write the number 142 in binary.

In school, you were probably taught to read the number 142 in three columns – the hundreds column, the tens column and the ones column.

When you add the numbers up in each column, you get 142.

Binary works in a similar way, but rather than the columns featuring increasing multiples of ten, each column increases in multiplications of two.

When you add the numbers up in each column, you get 142.

Binary letters and colours work similarly, with each letter of the alphabet, each symbol and each colour having a particular binary number.

But what does this have to do with magnetism or degaussing?

The ones and zeros we just learned about don’t just appear out of thin air. Hard drive platters are magnetic, and in simple terms, whenever you save data onto your computer’s hard drive, a small read-write arm moves across the computer’s platter to magnetise or demagnetise the little bits of data and turn them into binary numbers. When they are magnetised, they store a one, or, if you prefer, go from “off” to “on”. When they are demagnetised, they store a zero.

Degaussers work by using extremely powerful electromagnetic pulses to scramble the magnetic properties of the ones and zeros. When the ones and zeros are scrambled, the data they contained, whether representing numbers, letters, symbols, colours, or anything else, are permanently changed.

Can’t I just use a magnet?

In theory, yes, but in reality, probably not. In some instances, you could use a magnet to erase data from magnetic media. But it would have to be an incredibly powerful neodymium magnet. Sources estimate a pull force of around 450 pounds would be required to have any effect on the magnetism of a modern hard drive. Additionally, meddling with 450 pounds of pull force is incredibly dangerous. To put that into perspective, the force required to crush an average watermelon is 320 pounds. Crushing a human skull would require around 520 pounds of force. So, a slip of a 450-pound pull force magnet is certainly enough to crush a few fingers!

Even with a very large and powerful magnet, you still may not be successful in wiping hard drives, especially if trying to keep a safe distance. For example, you may be familiar with the famous magnet scene in the popular TV series Breaking Bad. If you aren’t familiar with this scene, the show’s two main characters needed a way to erase data on a laptop that was stored in an evidence room. In the show, they successfully used a scrap magnet (used to lift scrapped cars) and hooked it up to car batteries to create a makeshift degausser that can work through walls. In real life, this simply wouldn’t work and has even been debunked by Mythbusters Jr who recreated the scenario down to the finest details.

Degaussers use extremely strong electromagnetic currents to wipe data and work differently from regular magnets. Degaussing is therefore the safest and easiest way to erase magnetic data from hard drives.

Are all degaussers the same?

In short, no. While all degaussers use the same method to erase data, some degaussers are more powerful than others. Magnetic force is measured in units called gauss or tesla (10,000 gauss), and the higher the gauss force of a degausser, the more effective it will be at wiping magnetic data from hard drives. Powerful degaussers also take much less time to degauss hard drives, with some on the market so strong that degaussing takes just a few seconds!

As a rule, when degaussing hard drives and other magnetic media storage, you should aim for a degausser that has a magnetic force twice the amount of the device you want to wipe. You should also aim for degaussers that destroy magnetic media to DIN 66399 security level H-1 standards.

Do I have to buy a degausser?

Degaussers can be expensive to buy and difficult to store due to their typically large size. However degaussing services are available across the UK. Our own degaussing services are available on-site and off-site, and we degauss to the highest level – DIN 66399 security level H-1. We can even shred your hard drives after degaussing for ultimate peace of mind! The ‘degauss and shred’ method is the most effective way to ensure your data is irretrievable, and multi-step destruction processes such as this are highly recommended by security and government organisations across the world.

If you need any assistance with degaussing or shredding your hard drives, or both, get in touch today for a quick quote.

Sign up for our newsletter here to receive alerts about new blog articles, data protection advice, and Shred Station news. 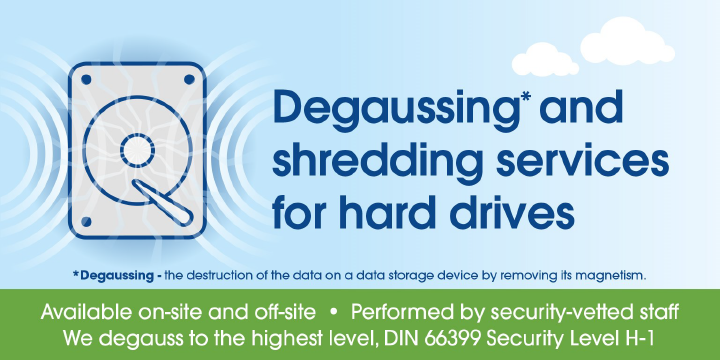